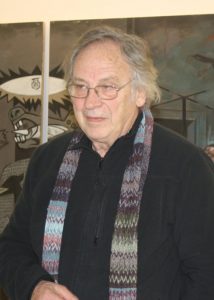 He was born in Athens. He studied painting and stage design at the School of Fine Arts and in England at St. Martins School of Art. He lived in England from 1972 to 1985, where, under the supervision of Eduardo Paolozzi, he organized an exhibition in 1976 at the Serpentine Gallery, Arts Council.

He is a founding member of the group “5 young Greek Realists”.

XI Biennale de Paris in 1980 and Biennale Sao Paulo in 1979. Stage designs at the Art Theater in 1988-2006 with director G. Lazanis. He has been systematically working on the relationship of painting with theatre and cinema. In 2005, he was elected a tenured professor at the School of Fine Arts, AUTh. Since 2012, he is an Emeritus Professor at the Aristotle University of Thessaloniki.

2013 Retrospective at the Benaki Museum and publication of his book “Order in Chaos” (Taxi sto Chaos), Kaleidoskopio publications, 2013. 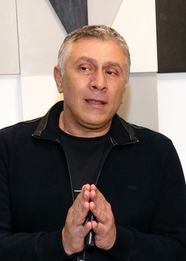 He studied History, Archeology and Art History at the Faculty of Philosophy of the Aristotle University of Thessaloniki, where he did postgraduate studies and prepared a doctoral dissertation on Artistic exhibitions and their audience in 19th century Athens (Thessaloniki 2000). Author and special scientific collaborator since 1993 at the Dictionary of Greek Artists. Painters-Sculptors-Engravers. 16th-20th century (Melissa Publications, Athens 1997-2000). From 2000 to 2019, he worked as a curator/ historian of art, as well as head (from 2007) of art collections at the State Museum of Contemporary Art – Kostaki Collection, Thessaloniki. His writings have appeared in books and scientific catalogs of exhibitions, while his articles have been published in art magazines and in the daily press. He has written the books: Giannis Moralis (Athens 2005), Christos Karas (Athens 2006), Opy Zouni (Athens 2006), Yannoulis Chalepas (Athens 2009), Yannis Tsarouchis (Athens 2009), A. Tassos (Athens 2009), Vaso Katraki (Athens 2009), Christos Bokoros (Athens 2009). Together with art historian Dimitris Pavlopoulos, he has written two books on the history of 19th century Greek engraving. He has curated exhibitions of Greek art and has collaborated in the organization and production of international exhibitions. He taught history of art (2010-13) at the University of Western Macedonia, at the Department of Fine and Applied Arts, Florina, as well as at the Hellenic Open University (2017-19). Since 2018, he has taken charge of MOMus (Metropolitan Organization of Fine Arts Museums of Thessaloniki) – Alex Mylonas Museum. 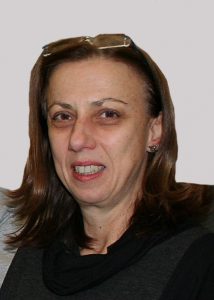 She was born in Komotini in 1959 and grew up in Thessaloniki.

1984: Diploma in Museology from the Louvre School. Stage at the Picasso Museum in Paris (in Palais de Tokyo).

Since 1994, she works as a curator at the National Gallery of Athens, specializing in contemporary art, and she is responsible for the post-war and contemporary art collections of the Museum.

In 2002, she curated the first large representative exhibition of young Greek artists (51 artists) from all contemporary media at the Averoff Gallery in Metsovo, with the theme “Sketching out today, tomorrow and yesterday. Young Greek Artists”. The exhibition was transferred to the Macedonian Museum in Thessaloniki and to Technopolis in Athens in 2003.

She has also participated in international exhibitions. In 2001, she represented Greece as a national commissioner at the 49th Venice Biennale, with young artists.

In 2001, 2002, 2003, she participated as a commissioner of Greece in the international sculpture exhibition Open in Lido, Venice. In 2003, she also represented Cyprus in the same exhibition, along with the Cypriot artist, Gioula Hatzigeorgiou.

The most recent exhibition of 2019 is the exhibition “Lands of Creation – A tribute to Metsovo” at the Averoff Gallery, with 64 contemporary artists from all media, a representative sample of contemporary Greek art.

She has published writings and studies on the history of art and has prepared monographs and analyses on the work of contemporary artists, mostly Greek artists. She mainly specializes in Greek art from the generation of 1930 until today.

She has given lectures all over Greece, participated in scientific conferences on art history and she has collaborated with specialized magazines and journals.

She is a member of the Hellenic Association of Art Critics (AICA), the Society of Greek Art Historians and ICOM. 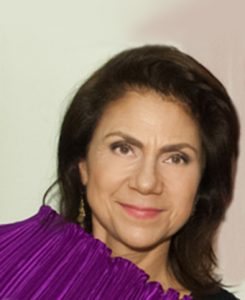 Louiza Karapidaki was born in Heraklion, Crete and graduated from the Pancretan School. She studied Art History and Archeology at the University of Humanities in Strasbourg and did postgraduate studies (Master I, Master II) at the Sorbonne Paris I University in Paris.

She has worked as a curator and director at the Historical Museum of Crete and since 1997, she has been working at the Hellenic Folklore Research Centre of the Academy of Athens in charge of the museum Collection and the educational programmes.

She has designed a number of monothematic museums in Greece, such as the Bread Museum of Amfiklia, the Museum of the Forest at Prokopi, Euboea, the Acritans Museum of Europe in Palaiochora, Chania, Crete, the Folklore Museum in Sami, Kefalonia, the Musée des Frères Maristes & du Lycée Leonin in Athens and has conducted the design for: the Olive Museum in Kapsaliana, Arkadi, Crete, the Children’s Museum in Xanthi, the Museum for Pastoral Life in Omalos, Chania, Crete.

She has written a series of educational programmes as well as the educational book “Learning about oil and olives”, published by the Academy of Athens, which won the Moscow Prize 2013.

She is a member of the committee of the Triennale of Polish Contemporary Drawing of the Kresow Museum in Lubaczowe, Poland.

She is a member of the Board of Directors of the Museum of Greek Children’s Art, the Association of Friends of the European Cultural Centre of Delphi and the Museum of Cretan Ethnology.

She has a collaboration with the Musée de l’Europe et de la Méditerranée in Marseille, France and the Kresow Museum.

She has attended ceramic art classes at the Free Workshop of Visual and Applied Arts of the Municipal Art Gallery of Larissa – G.I. Katsigras Museum.

She has attended a training seminar on Informatics & Technology at the Technological Educational Institute (TEI) of Larissa.

She has attended Arabic calligraphy courses at the MOHAMMED V-SUISSI University in Morocco.

She is also occupied with the making of art jewelry.

She has curated the illustration of the museum kit at the G.I. Katsigras Museum.

In the period 1999-2012, she taught painting and freehand drawing in the workshop of the Municipal Art Gallery of Larissa.

She is member of the Chamber of Fine Arts of Greece.

She is member of the Association of art courses.

She is secretary of the Larissa Fine Arts Association <8> since 2017.

She was a member of the Board of Directors of the Municipal Art Gallery of Larissa – G.I. Katsigras Museum in the years 2017-2019.

She has participated in many group exhibitions in Greece and abroad.

Her works are in private collections.

She works in secondary education as an art teacher.

Any cookies that may not be particularly necessary for the website to function and is used specifically to collect user personal data via analytics, ads, other embedded contents are termed as non-necessary cookies. It is mandatory to procure user consent prior to running these cookies on your website.